Part 2: Heat Management, Optics and the body of the LED Fixture

LEDs, the Heart and Soul of the Fixture

First, it is important to understand that LEDs in fixtures can be composed in different ways. This means that not every fixture is as suitable for supplementing plants with light as another might be.
The two main ways to manufacture LED fixtures are chip on board (COB) and single chip LEDs.

In COB modules, the LED chips are bonded directly to an aluminum plate. This makes it possible to concentrate many LEDs on a very small space, which results a high concentration of light. Even though this seems like a good way to save space and money while generating a lot of light, the COB technology comes with numerous different problems. 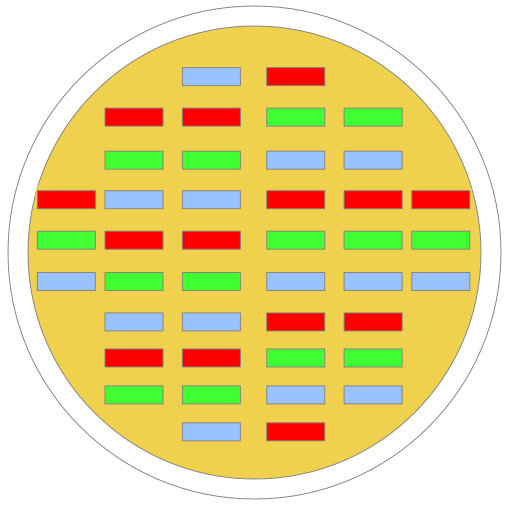 There are three different types of LED chips in this example (red, blue and green). The whole COB itself is powered by just one source, so every LED chip receives the same voltage.

The problem with this is that chips with different wavelengths have different electrical specifications such as voltage.
With this in mind, the manufacturer has two options when putting different chips on one plate:

Either some LEDs are over powered to get the output wanted and needed by the or the manufacturer under powers other LEDs on the COB to secure lower failure rates and handle the heat. This always results in a lower output.

What happens when chips get overpowered?
First of all the chip that gets overpowered cannot handle the high voltage, so eventually it burns out. In a circuit like this, the defective chip acts like a resistor and therefore generates heat as they dissipate electric power in a working circuit. The heat radiates around it and leads to more chips overheating which again leads to more failure. Other chips fail, act like resistors again and therefore a selfdestruction is taking place.
To satisfy the customer and to be able to claim a high output, manufacturers tend to overpower their COBs to generate more sells with a cheaply produced fixture. By the way, cheap production does not lead to a low price for the end customer!

Grade of COB LED Fixtures in the Market

Since the fixtures are easy to make, easy to order via online services or by one of the sellers mails which usually end up in your  spam folder, you should always pay attention of the grade of the fixture. The best is to ask if one could send you a picture from the insides of the unsealed fixture.

We ordered many fixtures, we ordered from nearly every bigger manufacturer out there and this is an example of what 1,500$ LED fixture from the US market could look like:

Two lower quality drivers were obviously cheaper than one good driver for the COB LED. In addition, the fixture was wired in a way so that if the center COB LED fails, the whole fixture fails.

The next image shows the COBs power cables and plugs for an open fixture, poorly sealed and roughly connected – It is obvious that this could not just destroy your fixture but also contains a life threatening fire hazard. 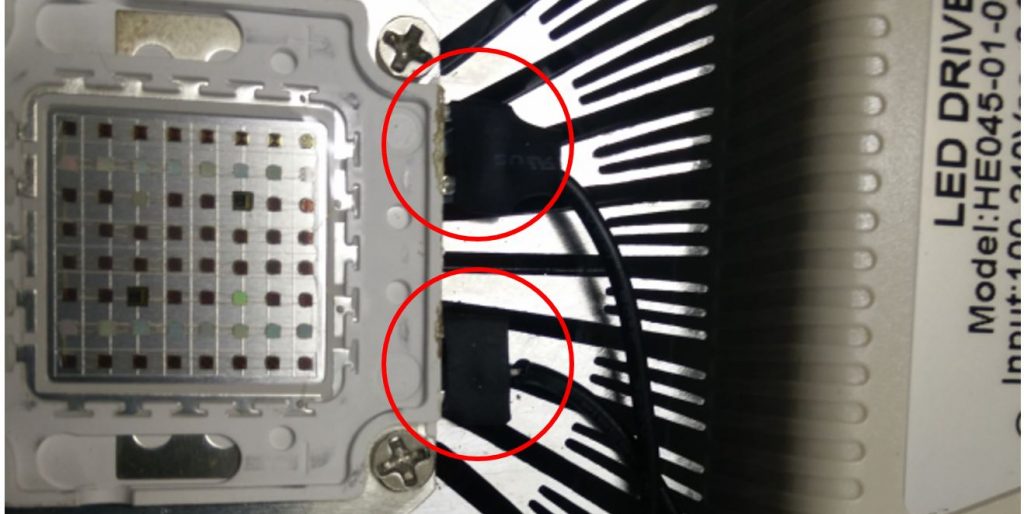 Contact to the COB LED, commercial COB based fixture

The second way to arrange LED chips in a fixture is by using single chip LEDs. In these fixtures, the arrangement looks much different from COBs. 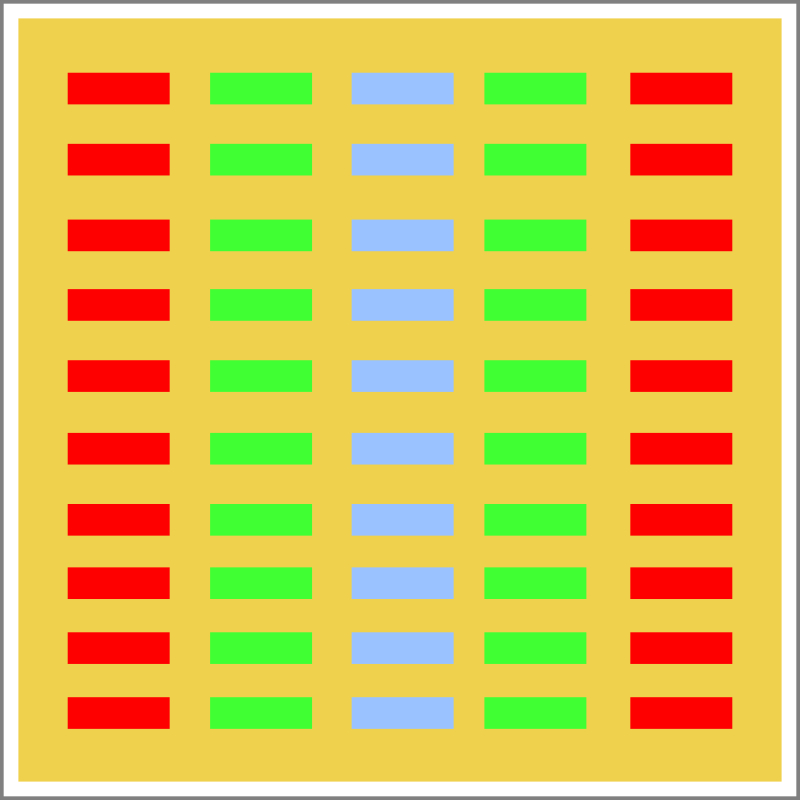 As we can see, the manufacturer aligns LED chips by type (again for example red, blue and green). This has the advantage that not the whole module is powered by only one source but the voltages can be adjusted for every line of LEDs. Therefor each row of LED chips receives the right voltage and is easier to manage.

No LED gets over- nor underpowered.

This leads to less failure and it can be made sure that the fixture produces the highest output possible. Even if a single chip fails, the other LEDs are not affected, the fixture is able to handle the blackout
of the chip.

In case of failure, a professional or an experienced user can replace the broken chip.

When choosing a LED fixture for your growing needs it is always important to take a closer look at the output of the fixture, not of the power consumption (150W in this example). If you are used to the concept of HPS lamps – this is quite similar.

As with HPS, where higher quality lamps exceed the output of lower class HPS lamps, there are differences in the quality of LED chips.

If a manufacturer of LED fixtures buys the chips, he has the opportunity to buy cheaper, lower quality LED chips with less output and mix it with high output high class led chips. This will decrease the overall production cost of the fixture. The power consumption stays the same, but reduces the output.

For example, the manufacturer can buy older or cheaper LED chips from a well-known manufacturer. He then advertises it with the brand name, but in the end, the chips are lower quality with lower output.

It is always good to keep that in mind when choosing the right LED fixture, the cheaper LED fixture (even with well-known brand names for the chips) may not be the most reliable one.

Taking a Look on Efficiency

As from the beginning, we try to keep things as easy as possible. For this, we can say that the efficiency of the LED chips decrease when driven with higher power.

So when the LED gets under powered, this results in a higher efficiency.

However, there is a problem with under powering LEDs – the output to price ratio of the fixture will not be good anymore. If we would like to under power LEDs and want to have the good amount of light output? This would result in a huge LED fixture with many LED chips and will cost a fortune. Therefore, this is not an option either.

When choosing a LED fixture it is more reliable to make a comparison not only based on μmol/W, every other aspect has to be taken care of too.

Like the overall cost of the fixture in opposition to the amount of light, the fixture can generate on a given surface. Mixing Light and Space Between Plants and Fixtures. As mentioned above there are different ways to arrange LED chips within a fixture. COBs produce more of a spotlight while single chip LEDs provide a wider and uniform light distribution.

With COBs, the user has to ensure a bigger distance between the fixture and the plants to create a wider distribution of the light. If this is not done properly, the emitted light does not mix the right way. This results in different lighting and different spectra within the growing environment.

Some fixtures try to use both ways of lighting in a single fixture, COBs and single chip LEDs, which usually looks like in this image. 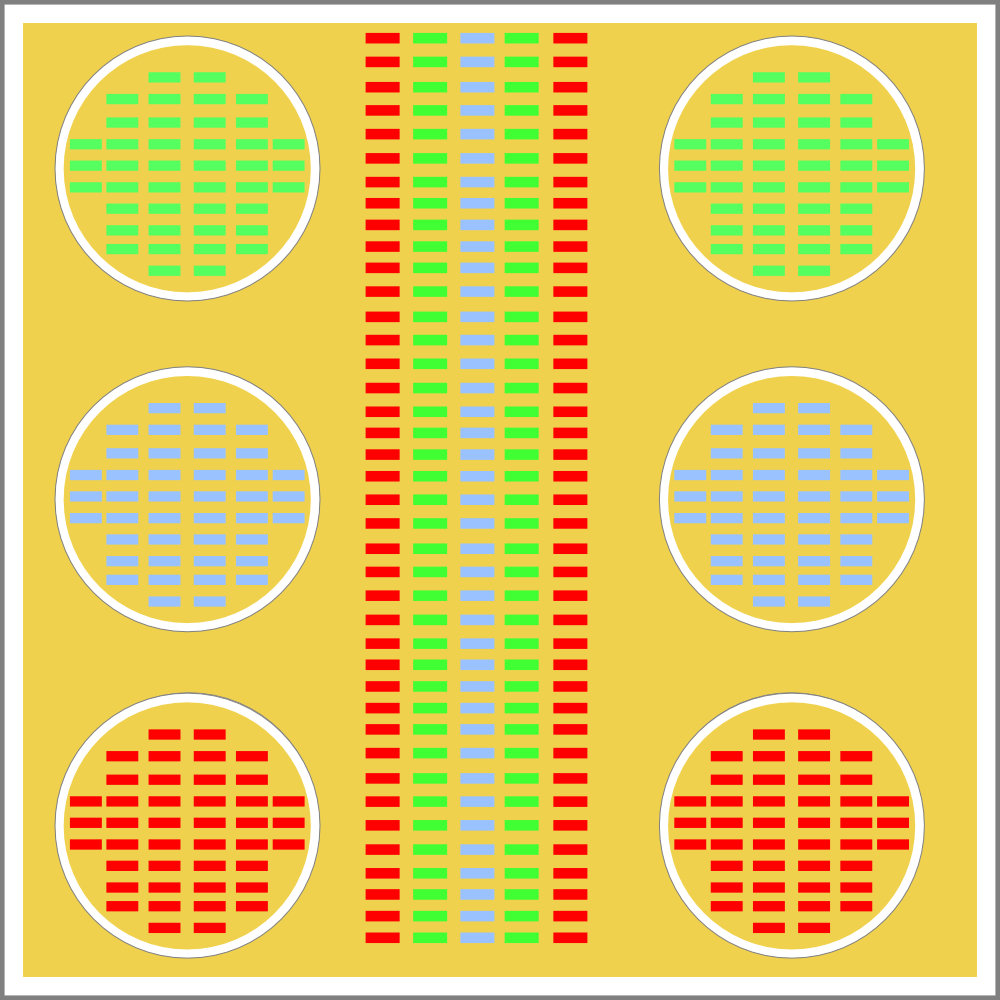 Scheme of a Fixture with COB and Single Chip LEDs

Single chip LEDs are used in the center of the fixture while COBs distribute light from the sides. The problem here again is that the light does not mix until a certain distance from the plants is ensured. If we have a look on how the light is distributed by a fixture like this, we also have to consider other aspects.

On the outsides, there are the COBs while on the inside we have the single LEDs. Considering the different radiation patterns of these and reflections within the growing environment a problem occurs. 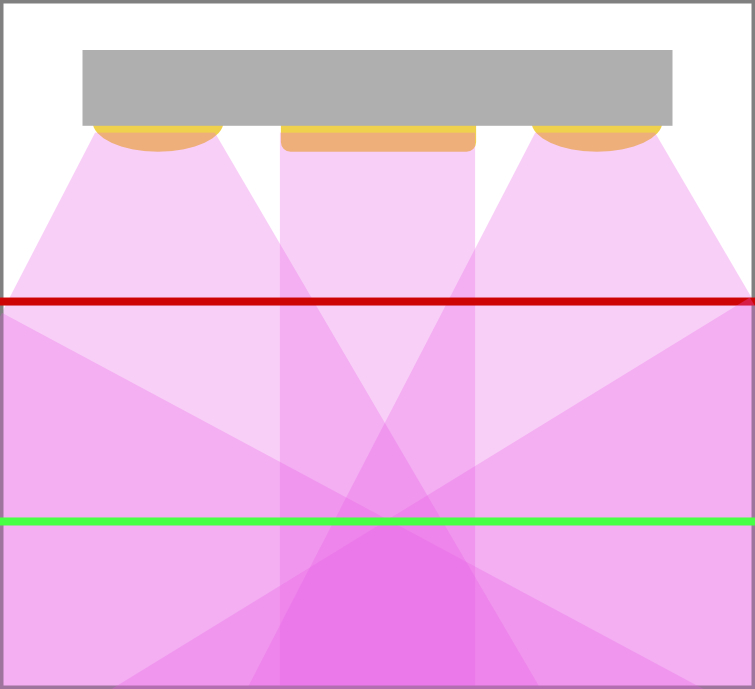 The manufaturer states the highest ouptut of the lamp which might be measured at the red line, for example at a distance of 30cm. What this drawing shows is that the light truly begins to mix at the
green line. So the fixture might have a high output but at the distance the light needs to travel to actually mix, the high output can not be ensured anymore.

Furthermore as we see in the bottom of this example: the light is only uniform in the very center of the picture where all the beams and reflections come together.
On the outsides we again have different intesities and spectra.

This again leads to uneaven results in the growth of your plants.

The Special Case of White LEDs

There are companies on the market that want to make the customer think that only white light is needed to grow plants because it is considered “full spectrum”.

Essentially using only white LEDs is comparable to using MH (metal halide) or CDM (ceramic discharge metal halide) lamps for blooming. It sure can be done but it will not give the best results. However pure white LEDs can be used within the vegetative stage of the plants, just like conventional MH and CDM lamps.

LED fixtures have the advantage and ability that different spectra can be used and the user should benefit from this.

COBs are mixed on one board, this leads to problems with powering them evenly, which again shortens lifetime of the whole fixture. The fixtures are often poorly wired, contain risks and are often overpriced.

Single Chip LEDs are the better option, they operate more consistently because every line receives the right voltage. This leads to longer lifetime and best output.

Mixing both technologies in one system causes problems in uniformity of lighting.

Do not get scammed: know what you want and need and be sure of the output you get for your money.

Read in the next part:

This site uses Google analytics, if you do not want to be tracked, use this link to disallow Click here to opt-out.
To change your privacy setting, e.g. granting or withdrawing consent, click here: Settings